The Wisdom Light of Mr.Nut 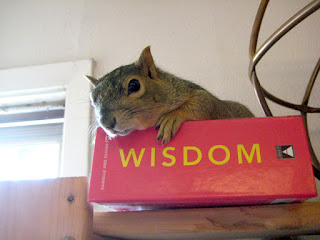 The best teachers are those who show you where to look,
but don't tell you what to see.   ~Alexandra K.Trenfor

Every morning I wake up and feel so much gratitude for the gift of living with this amazing squirrel teacher!
Mr.Nut may not say a word,
but he speaks volumes through his actions.
He is tender, forthright, generous, and kind. He  has more integrity in the tip of his ear than many people practice in their whole life. When he sets his sight on a goal,
he sticks with it until it's accomplished.

Mr.Nut's brothers, Sweet Pea and Bucky are currently visiting the release cage outside the front door.  They are integrating into the neighborhood and come back for food and water and the occasional nap.  Since the cage is mostly empty, I give Mr.Nut the choice to play in it. And also to see if he would actually prefer to be outside. However, today he made it clear that he was perfectly content to relax upon his favorite perch, on top of the bookshelf next to the front door.  He is teaching me how to be still and just enjoy the present moment!

Mr.Nut is a master of surrender!  Sometimes when he sleeps, he lays belly up, exposing his tender side. 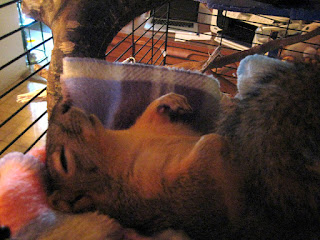 I rub his furry belly and he relaxes even further. He demonstrates such sweet vulnerbility and the ease of trusting in the flow of life.

Lately Mr.Nut has been hanging out at the door and the window sills. A few times he has lunged at the screen door and it seems he is wanting to move outide.  Just the thought of him leaving weighs heavy on my heart. I love Mr.Nut like no other and I fear it's time for me to let go and allow him his freedom. I am seeing how attached I've become to this sweet being!  It was about a year ago that I said goodbye to Bucky and I didn't think I would ever love another squirrel like I loved him.  And yet, less than 2 months after Bucky died, I was brought a fallen nest of baby squirrels which included Mr.Nut!

Just yesterday I received this awesome video of Byron Katie called "Dying Into Love".  It's exactly what I needed to hear as I contemplate my love for Mr.Nut and what "LOVE" really means:

Posted by Squirrel Lady of Town Lake at 12:41 PM No comments: