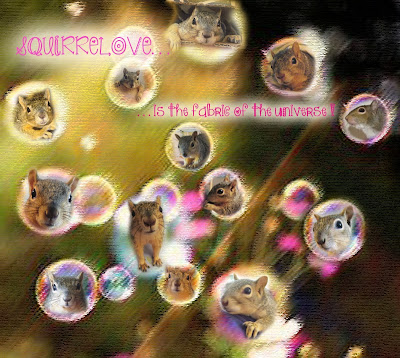 Mr.Nut told me today that Squantum Physics is the "state of the art" field of physics that can answer all your questions about the nature of reality!  He says that 'Squantum' is the branch of physics that deals with the indivisible units of energy called 'squanta'.  All energy is made up of these squanta particles and if you look at them under a powerful electron microscope, you will see something like the photo above.  Each squanta is comprised of pure squirreluminosity.  There is no space that can ever be separate or apart from this squirreluminous juiciness!

Mr.Nut recommends that you sit quietly in meditation and contemplate this!  What this means is that the entire universe is completely brimming with squirrelove!  Every wave and every particle is squirreluminous!  No one and nothing is left out!  That means that there is nothing to worry about!  Every problem can be solved simply by resting in the truth!  The spaciousness of squirrelove rules the totality!  Squirrel happiness proliferates randomly and is inclusive of absolutely everything!  This is indeed cause for celebration!

Now of course there are always those skeptics that will offer up objections, such as:

Q. If every space is full of squirrelove, then how do you explain the misery on the planet, for example the killings of innocent animals? How could that be considered "squirrelove"?

Now in order to answer this question, we will have to explore the "wave-particle duality". Read these excerpts from On Truth and Reality:

In the quantum world, subatomic particles lurch about, suddenly disappearing from their starting points and reappearing as if by magic somewhere else. ... In many cases you cannot watch a subatomic particle move from A to B; you can only observe it at point A, and, sometime later, observe it again at point B. Just how it got there is a mystery. In this realm particles sometimes act entirely like waves, and vice versa. This equivalence of particles and waves is related to the equivalence of matter and energy that Einstein discovered. ... How could nature be both things at once? How could both pictures be right? Yet how could either be wrong? (Margaret Wertheim)
Mr.Nut suggests that you observe the following squirrel animation:

You can see the little squirrel above is a particle when it is not moving and a wave when it is moving. Regardless of whether it is in its wave state or particle state, it is still a squirrel. We call this a "Squanta"!

Mr.Nut says that you can use this "wave-particle" duality to answer the question posited earlier.  He says that if you look at "Squirrelove" as the total space, (in other words, it includes absolutely everything) and then take one particular incident (e.g. animal abuse) as a particle in that space.  First take note that the particle is not separate from space.  That means that both are happening at the same time. Now let's apply an arbitrary label of "good" for a wave and "bad" for a particle. Take the particle of abuse... obviously labeled "bad".  Sometimes a particle appears as a wave i.e. appears to be "good".   Killing an animal to feed a human would be an example of this... good and bad are happening at the same time.  Squirrelove, the space that includes it all, is simultaneous with the waves/particles.   Mr.Nut explained to me that a wave/particle is not inherently good or bad. He told me that it is simply our perception that decides.  So there is actually no "evil" that exists outside of our perception that it exists!  That's very good news indeed!  Mr.Nut says that enlightenment is simply that state in which you understand this.  Thank you Mr.Nut!

And this is what Mr.Nut's dear friend, Den Lilla Ekorren is singing about~

Posted by Squirrel Lady of Town Lake at 1:21 AM 2 comments:

Stepping Into the New Paradigm 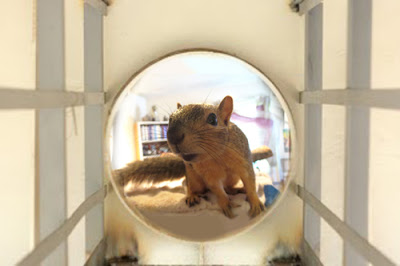 Muffin acts as guide into the New Paradigm

Mr.Nut is encouraging me to talk about "stepping into the New Paradigm".  This morning he telepathically communicated to me that people need to 'get up to speed' with all the changes that are happening! He says we are being pushed and prodded to let go of our old concepts and outdated programming of fear, scarcity, and separation.  He recommended that humans put aside some time each day to rest and reflect on all the good things that are occurring  in our lives and to feel gratitude for all our blessings!

Therefore, squirrels are not control freaks like humans.  They adapt very easily to their circumstances.  They stay calm whether it is a time of feast or famine.
They remain content regardless of the situation.
It is a great honor and privilege to
be graced with a squirrel teacher!
So whenever you are feeling overwhelmed
and stressed out, just stop,
and take a "squirrel moment" 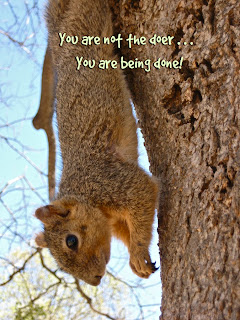 And you will return to Squirrelpeace!

Posted by Squirrel Lady of Town Lake at 9:48 AM 4 comments: