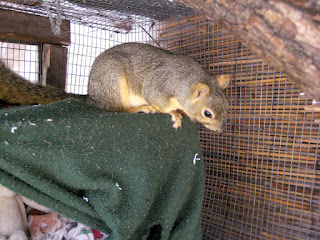 Well, inevitably the day arrived when Mr.Nut put his paw down! He has tired of being confined to a small space and has made it very clear to me that it's high time he took the leap into unknown.  Reluctantly, yet knowing in my heart he was right, I put him in the very spacious (8x6x3ft) release cage outside my front door.  Our Texas summer heat precludes a release in the summer months and the weekend cool front coincided with his new interest in expanding his territory. 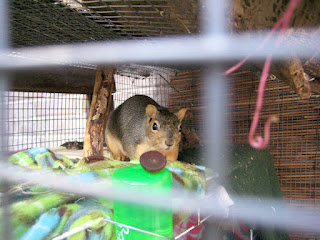 The weather cooperated nicely for the first two days.  Mr.Nut had not quite anticipated the difference in environment and seemed quite puzzled with his new, much larger abode.  He just didn't quite know what to make of it. Every new noise seemed to startle him and he spent most of the time hiding in a corner of the cage under some blankets. He did seem relieved whenever I would join him in the cage.  Then we could wrestle and play like before, but now there was so much more space!

Today on day 4, the temp reached up into the mid-90's and I went out to check up on him around 3pm.  There he was, laying on his back panting very fast and hard, and looking rather uncomfortable. I picked him up (with no resistance from him whatsoever), laid him in his small cage, and brought him into the cool air-conditioned house.  He rested and we played and he seemed relieved to be back inside.

We'll try again when the weather cooperates.... in the meantime, I'll sing a song for Mr.Nut!  I'll bet you know this one:


Posted by Squirrel Lady of Town Lake at 8:31 PM 2 comments:


Amazing Grace how sweet the squirrel
That saved a wretch like me
I once was lost but now am found.
A squirrel did rescue me!

T'was a squirrel that taught my heart to feel
A squirrel, my fears relieved.
How precious did that squirrel appear
The hour I first believed!

Amazing Grace, how blessed am I
To live with a bodhi-squirrel
His constant grace shines on my face
I'm such a lucky girl!

I once assumed that I knew more
Than baby squirrels so sweet
But now I see their wisdom heart
And lay down at their feet.

Amazing squirrel how sweet the soul
That saved a fool like me
I once believed that I knew best
But now follow my squirrel's lead.

When we've been here ten thousand years
Bright shining as the sun;
We've no less days to sing squirrels' praise
Than when we've first begun!

Amazing squirrel how sweet you are
To save a fool like me.
I once was lost but now am found,
Was blind but now I see!

Posted by Squirrel Lady of Town Lake at 8:16 PM No comments: